Hotel room ranges between public and private space. It is a space that we claim for our »home« for limited period of time. It becomes our private space – it becomes familiar and well known. This turnaround (from public/unknown sapace to private/well known room) happens as soon as we walk into the room and when we put our personal things out. I will try to portray this turnaround through the issue of contemporary (married) housewife – who is beside the husbands lastname kind of forced to do decorate the whole aprtment and she has to maintain the balance between domestic and functional home. In this way she achieve that she is able to maintain to be a housewife, mother and a women with successful career.

I  tried to highlight this issue through embroidery or more precisely by making the monogram. Monogram is a kind of a signiture that is embroidered on the edge of embroidered linen, towels, napkins etc. This idea came from the custom which the engaged girls performed before (and after) the wedding. The custom is that the bride has to bring dowry or so called »bala« into the marriage. »Bala« is a gift to a groom and it was usually assembled of bed linen, towls, tablecloths etc. Girls embroidered each white piece of cloth with beautiful patterns and when they finished they embroidered their monogram on a corner of each piece. This is how they marked their property and shown everyone their knowledge. However, emroidery is a time consuming task, that’s why they started doing embroidery in advance – by this I mean, they started before they were even engaged. In this case they left the initial of husband lastname unfinished/blank.

I have to mention that monogram can be done in many different ways. I will use so called monogram of three letters – known by name monogram for married women. The first letter is initial of my first name, third letter is initial of my maiden name and the middle (bigger) letter should be the initial of my husbands surname. But instead of using his surname initial – or in my case »blank space« I will replace it with embroidery of different symbols and fetisch objects that are so called »typical women things« or are in any other way socially stigmatized as a taboo (like: vibrators, tampons lipstickc.). Color of the thread that I choose for the monograms is red, because red thread was used for embroidery of wedding dowry.

With this subtle, almost imperceptible intervention into the space I am questioning social contract, better know as marriage, like we know it should be equal for both partners man and woman, but is not – because the tradition is saying that the woman should take his surname. Why? With this action men in some way subordinate woman, and if I exaggerate a little bit, she becomes his object with his signature. That’s why I’ll be most focused on decorating the bed, because bed in some way embodies the marriage. And what is hotel room if not the bedroom with a large bed in the middle?

Beside the problem of social contract I also highlight the problem of so called typically female work – like sewing, embroidery, knitting etc. And there is also the issue with symbols that I will use, which are disturbing to society and we should not talk about it, or are on the other hand so »normal« that we do not question ourselves why are we using it, and when did we accept it – such as make up, bras, heels etc. 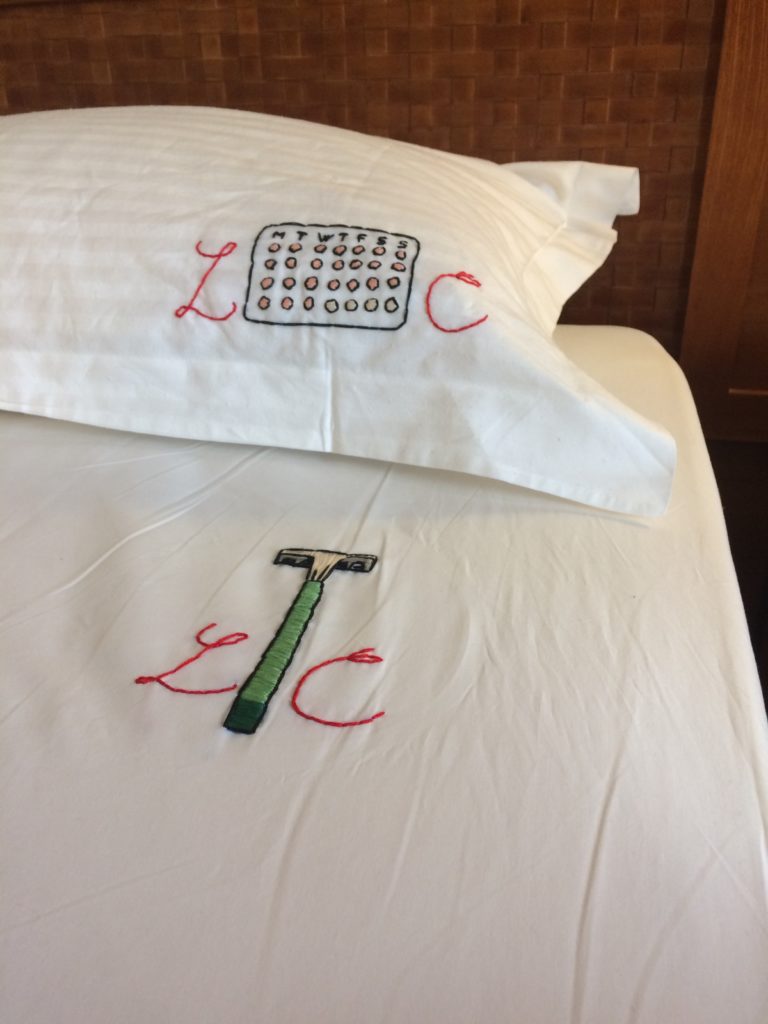 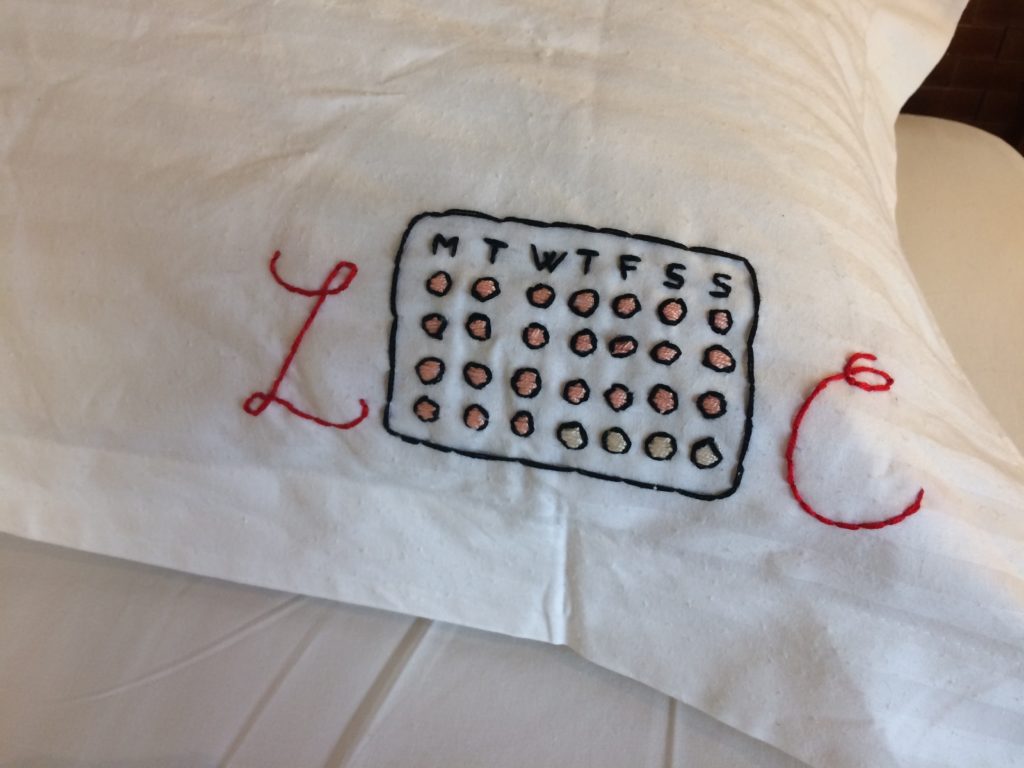 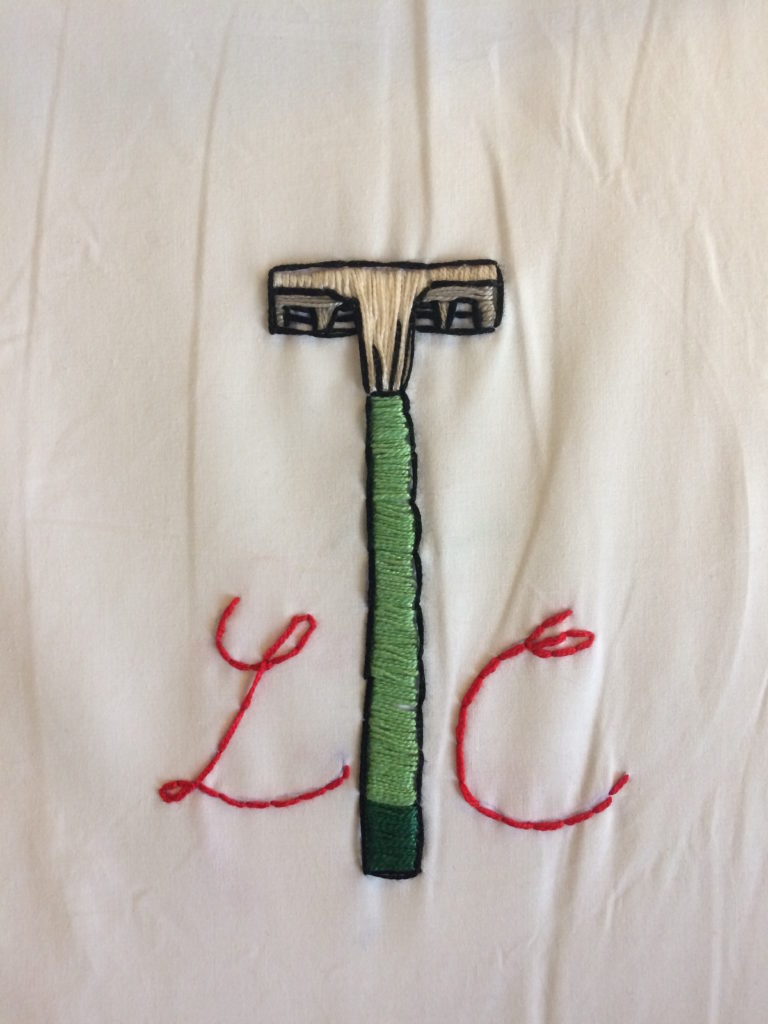 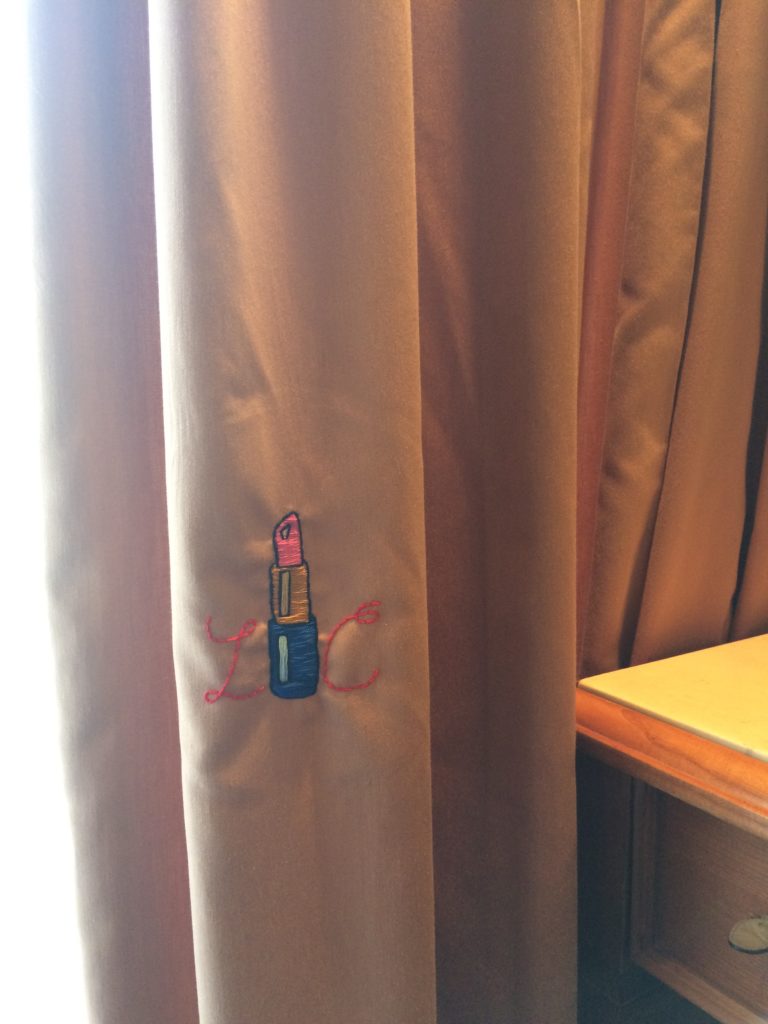 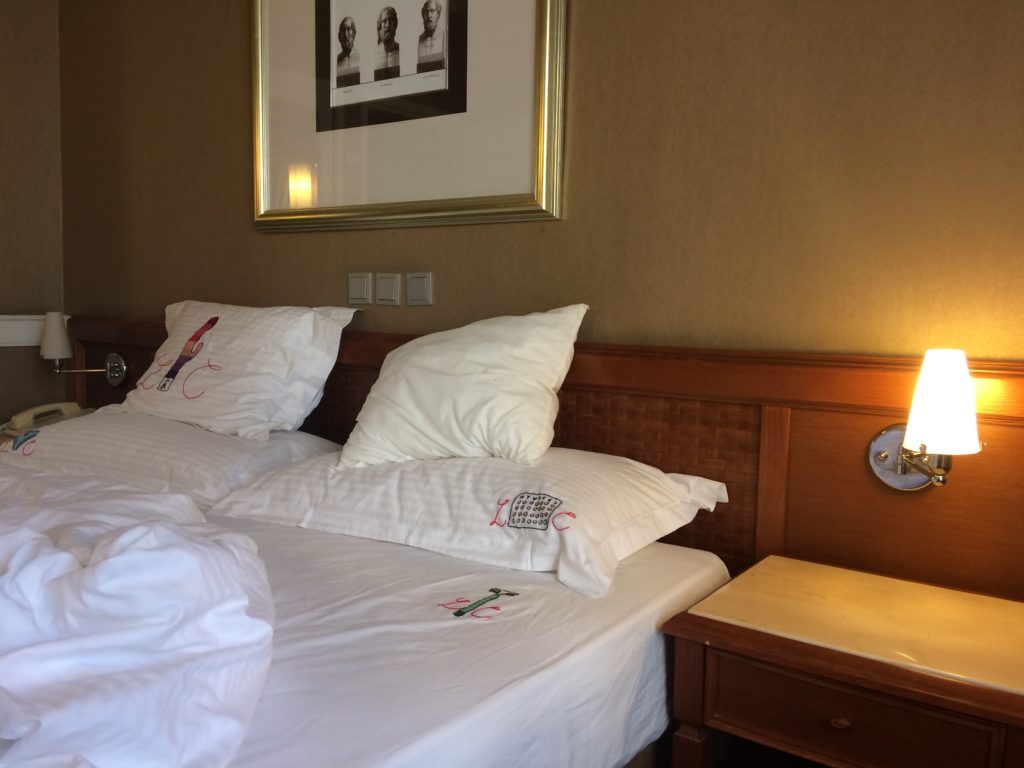 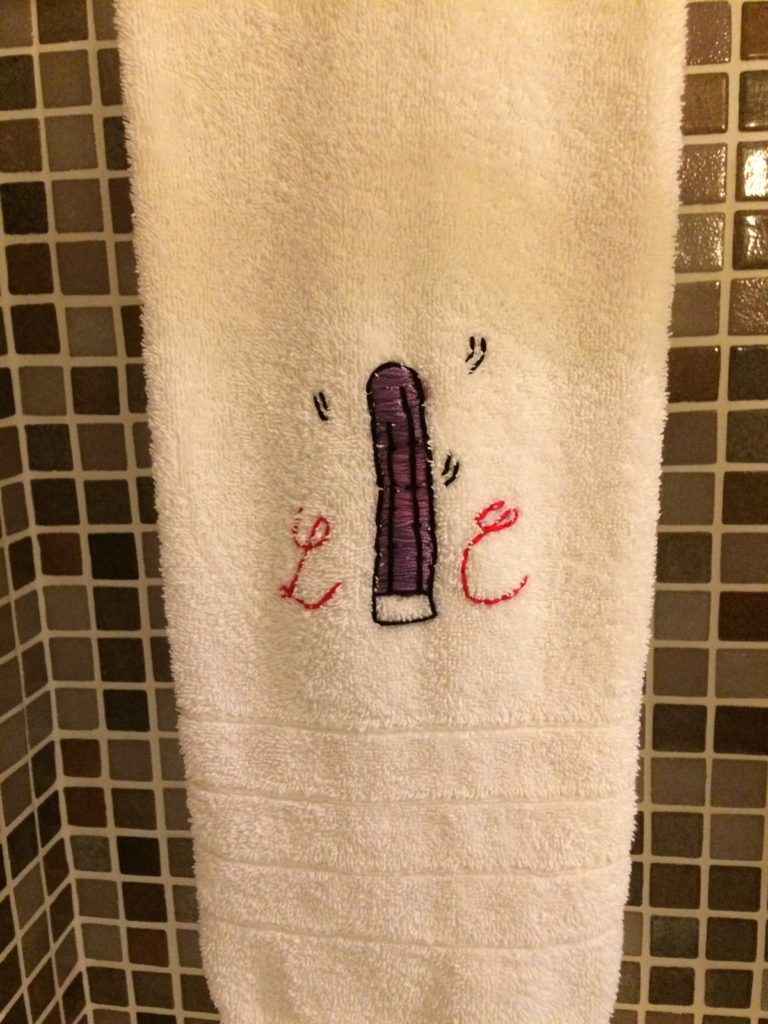 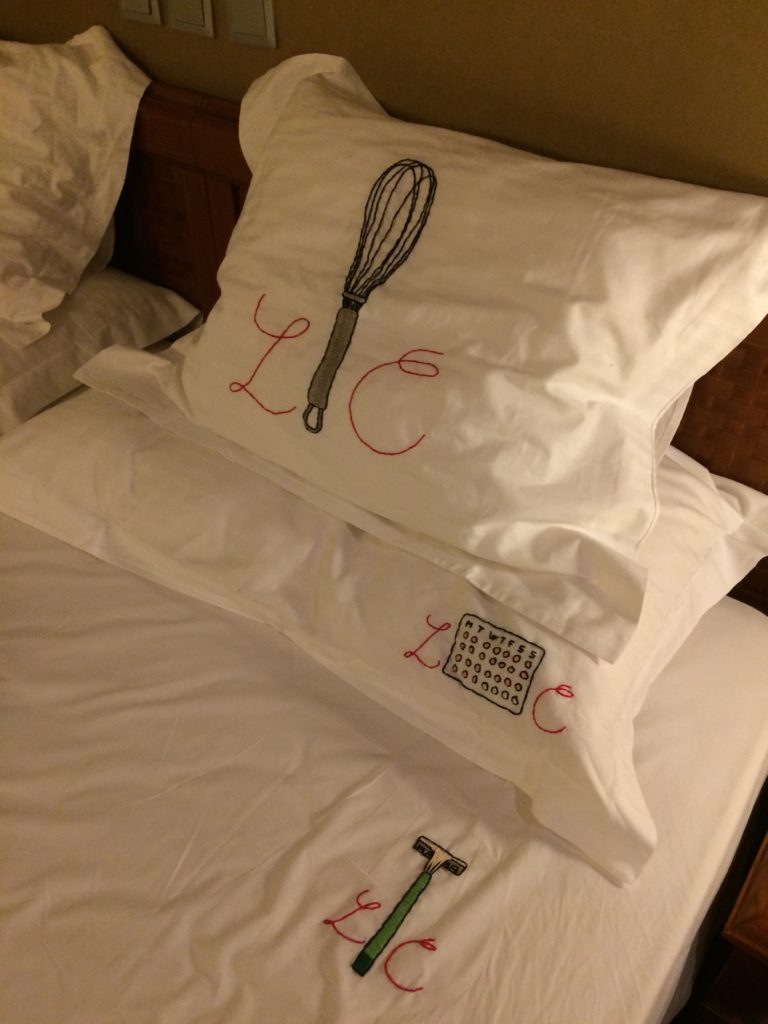 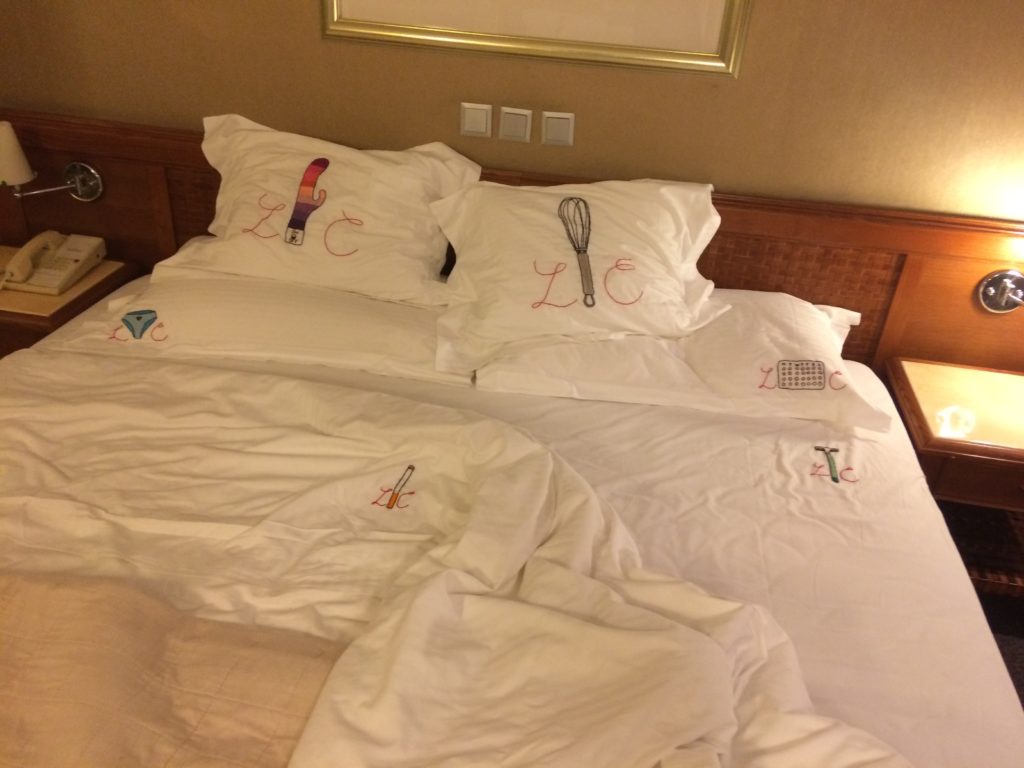 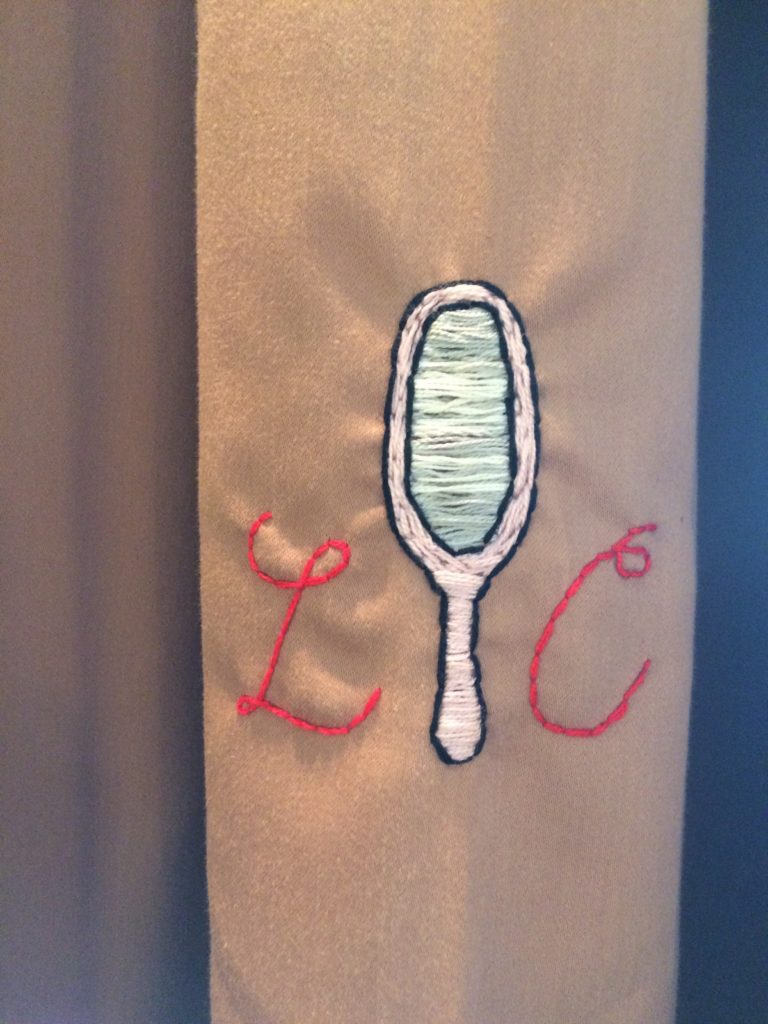 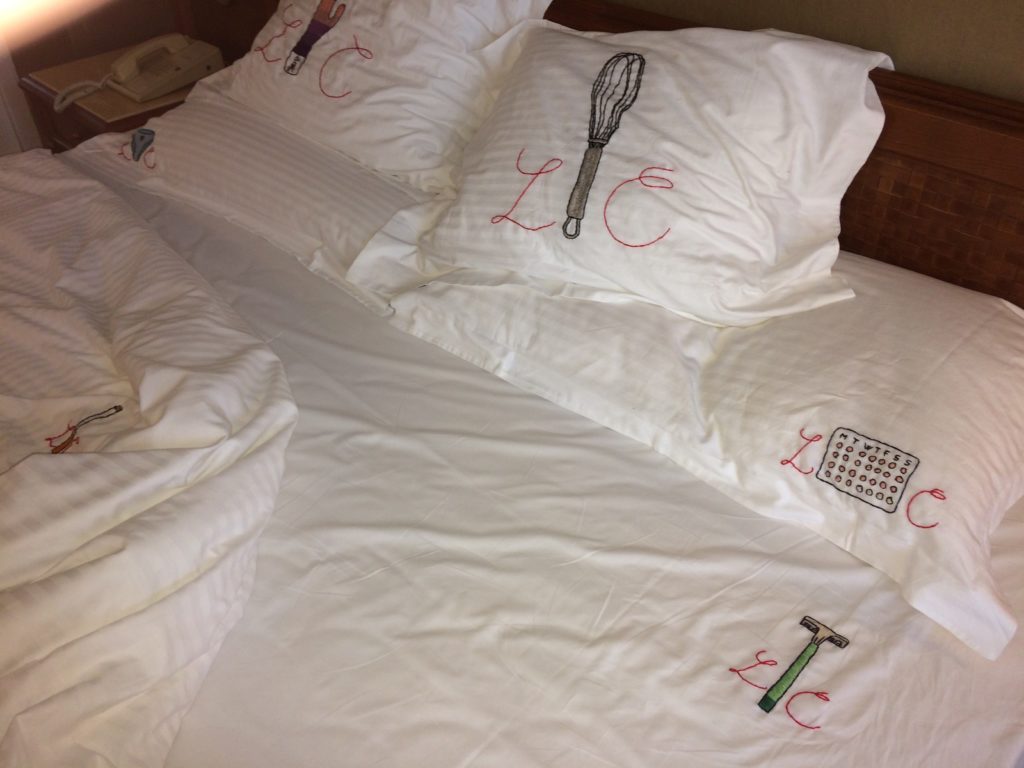 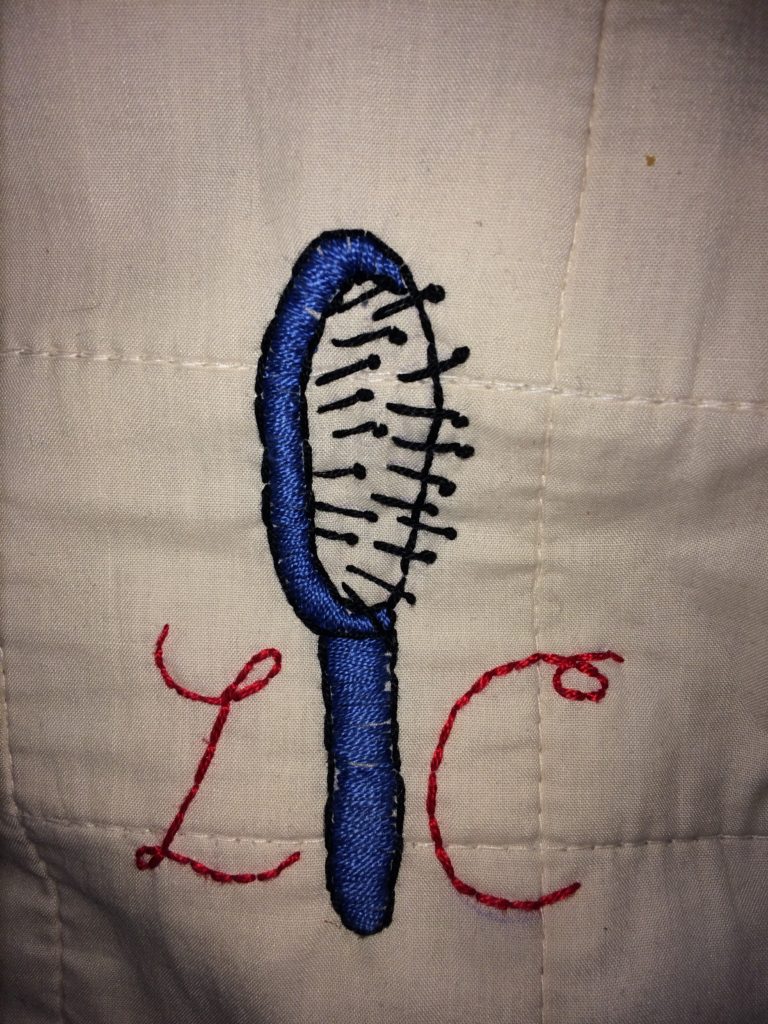 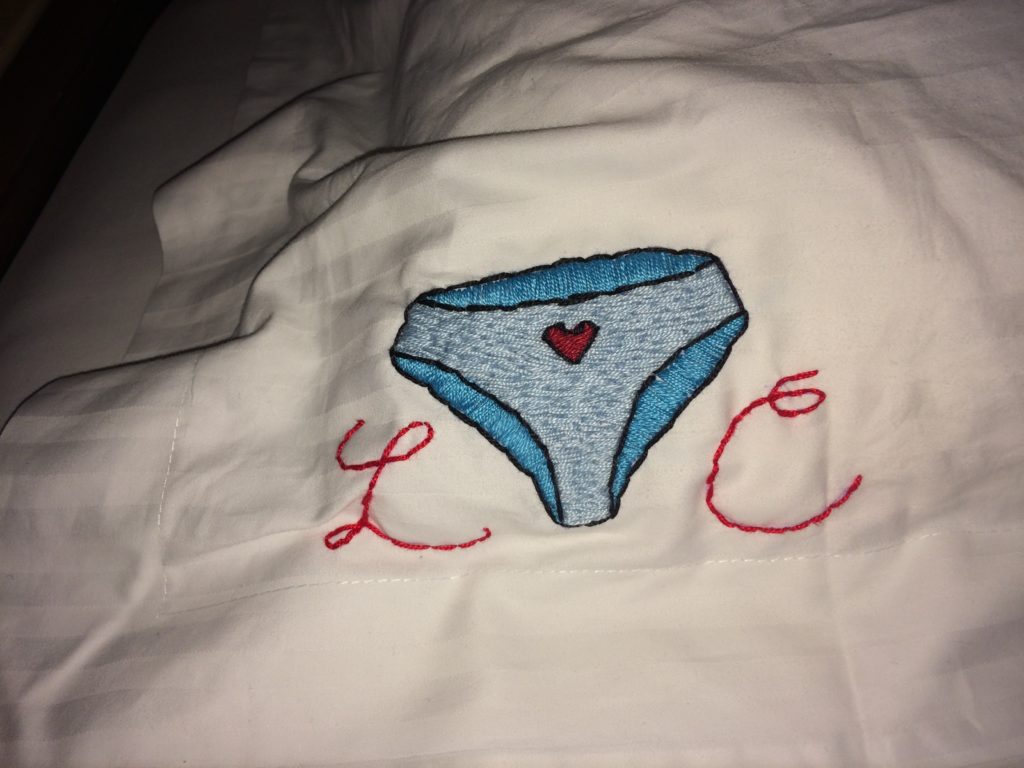 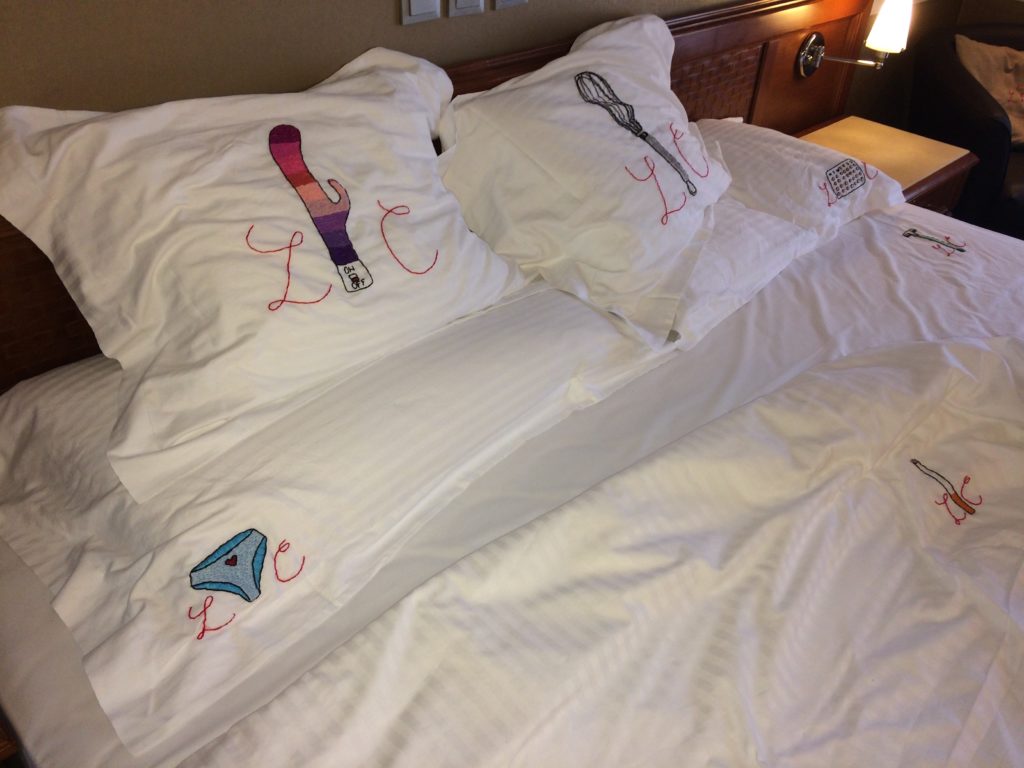 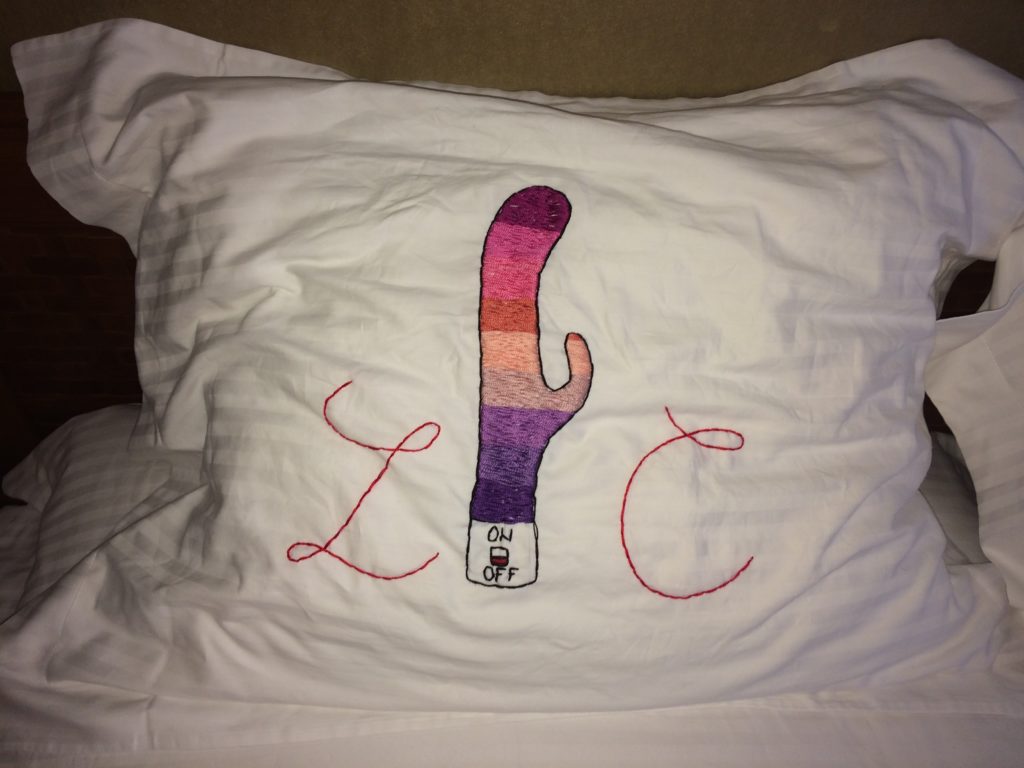 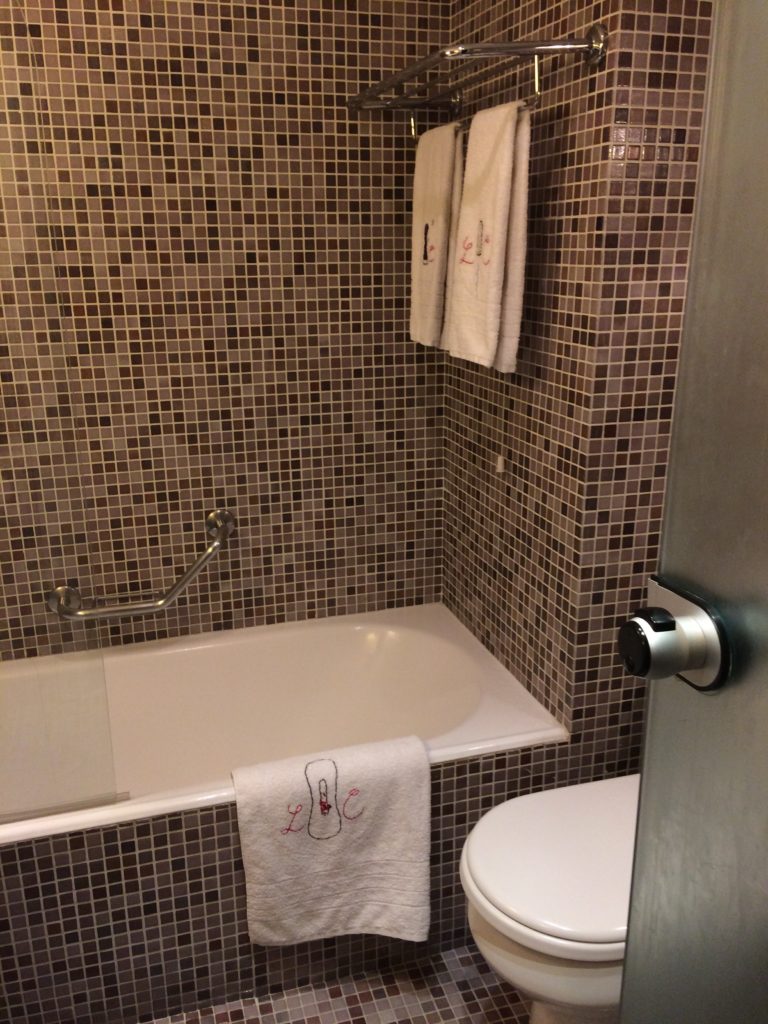 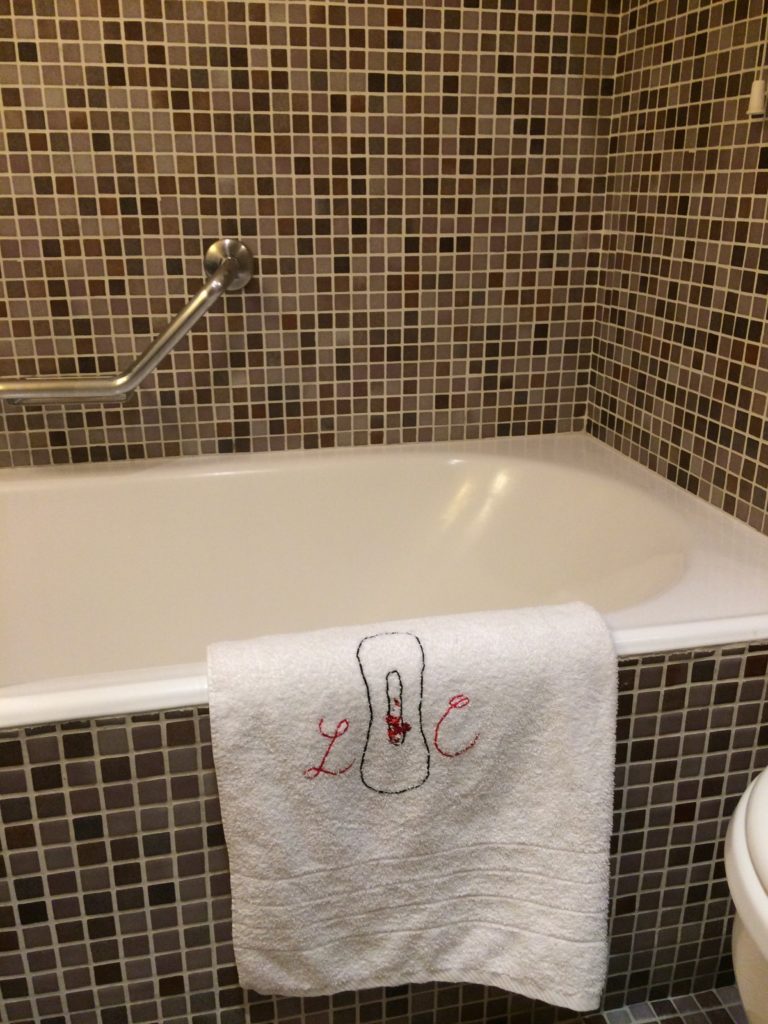 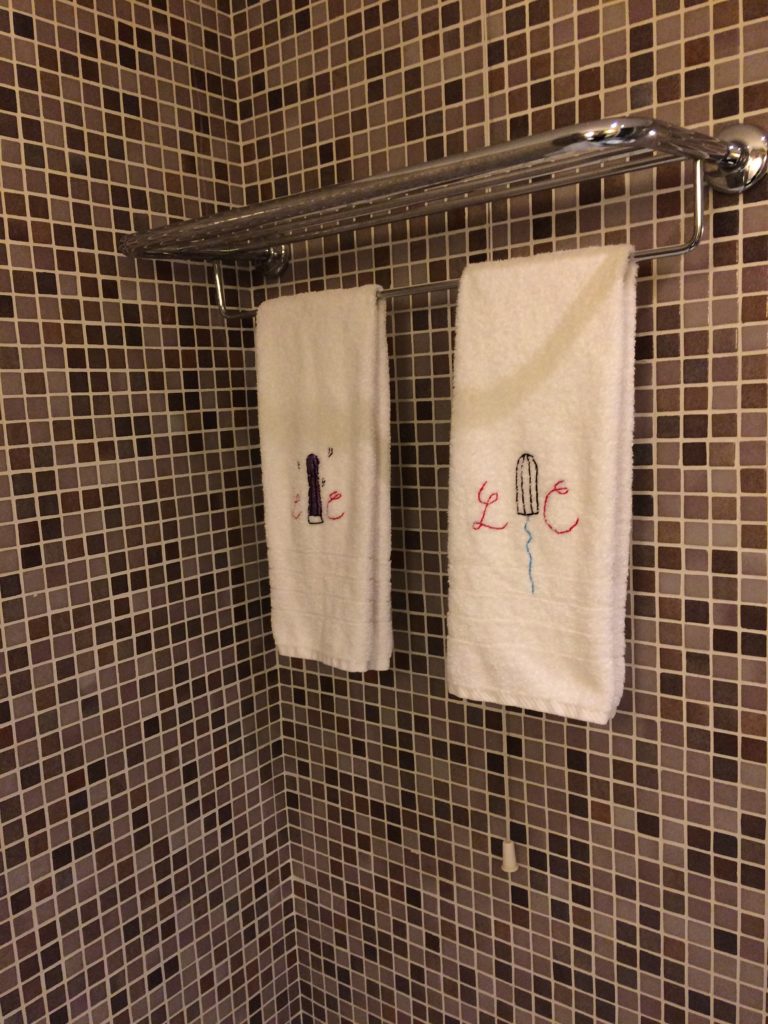 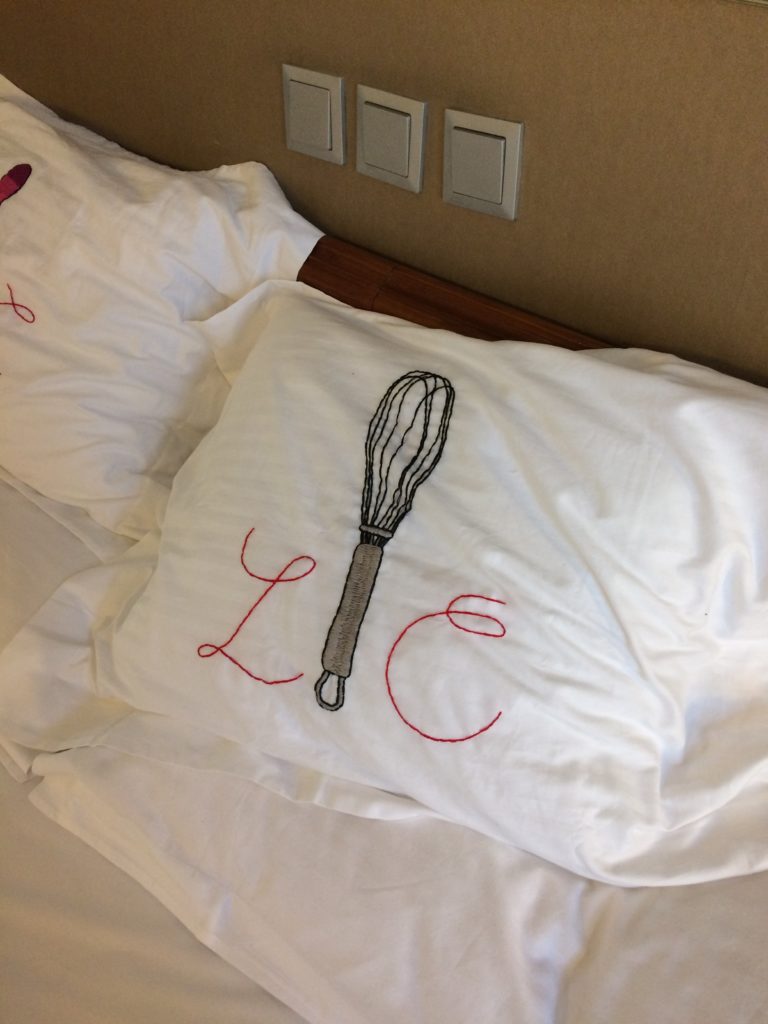 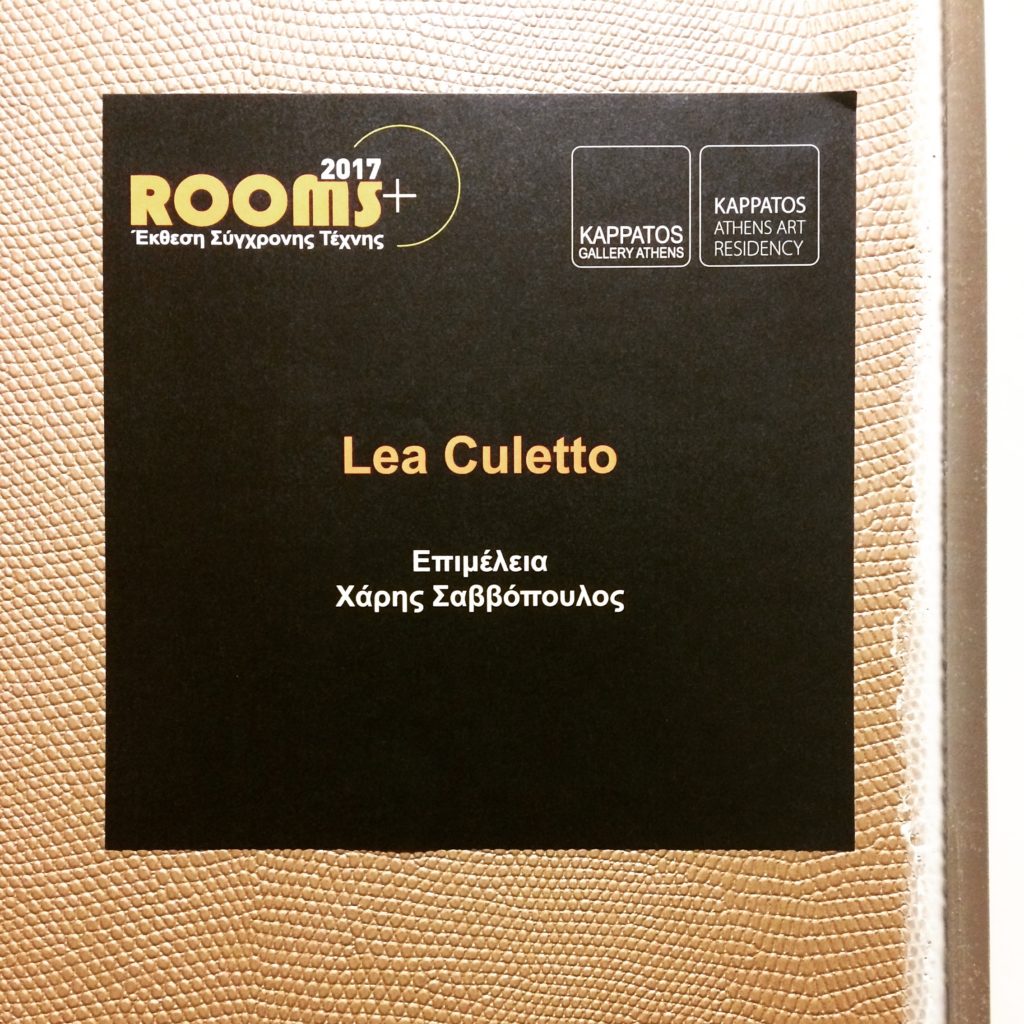